Last weekend of 2013 Kyiv Euromaidan's IT Tent (IT Namet) and Ukrainian startups community held a hackathon aiming to create innovative tools and technologies able to improve life quality and public interaction of  Ukrainians. Participating teams had to create a working prototype of an app or platform with the potential to encourage more active citizenship and better interaction between average Ukrainians and their community officials. Each team had only 3 minutes to present a project to the audience.

As a result, 16 app development teams introduced 18 projects most of which are in their beta versions today. The voting helped determine 3 hackathon winners:

1. CherryTea - an online service for volunteers that helps connect people willing to donate some clothes or food to low income families or orphanages with drivers willing to help deliver these donations to their destinations and/or charity centers.

2. SpilnoTV 2.0 - a redesigned public online TV channel crowdfunded and supported by average Ukrainians. The project aims to grow into a highly interactive public platform free of any ideological, political and market bias. The ultimate goal of this project is to help transform Ukraine into a democratic, unbiased and open minded country with a very strong civil society.

3. Collective safety - an ambitious project aiming to protect average Ukrainians from corrupt officials and repressions against active citizenship. So far the project includes the following elements: online alarm systems, mobile and web tools allowing effective coordination of activities between groups of activists providing legal and other types of support to the Ukrainians. 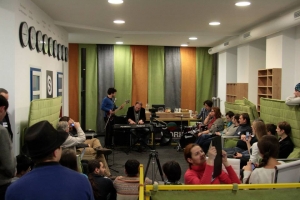 Apart from these solutions, Hackathon helped launch other interesting innovative projects including:

Involved from the very beginning into peaceful protests against the ruling Cabinet of Ministers (that refused to sign Agreement of Association with the EU) and beating of peaceful protesters and journalists at the end of November 2013, Ukrainian tech guys have now become an intimate part of the social movement both online and offline. They opened their own IT Tent at Euromaidan in Kyiv for the purpose of creating technologies and tools of public assistance for Ukrainians striving for a democratic and pro-European society.

Do you believe today's technology is really able to strengthen whole nations in their fight against injustice, corrupt authorities and dictatorship and change ineffective political systems?