6 Best Use Cases for Python

If we go to Python's official site, we'll find the following definition of this programming language that's been around for nearly 25 years but has started gaining traction beyond scientific computing only recently:

Python is a programming language that lets you work more quickly and integrate your systems more effectively. You can learn to use Python and see almost immediate gains in productivity and lower maintenance costs.

Today, Python ranks 5th most popular language, according to TIOBE index. While some developers believe that Python is for kids, and PHP or C are for real men, the value of Python keeps growing across industries and projects, and skilled Python programmers are in a very high demand everywhere (just open IT vacancies on any job portal to see it for yourself!).

Python is mainly used to boost the speed of a software development process by providing an easy to learn and implement and, what's even more important, a readable and clear interface for developers and those who maintain the project. Due to the fact that Python has modules that are readily available for programming almost any web function, its application use cases are many and diverse. This makes Python a general purpose programming language.

Another reason why Python is becoming so popular these days is the fact it's highly compatible with Cloud technologies and is used extensively by Google in most of its enterprise level software solutions including Google sites, YouTube, Google Code, Google AdWords, etc.

Today, Python is used on many web development projects for:

Python is used for stuff automation, too. Besides simple scrips, you can use such Python tools as Fabric, Salt or Ansible to automate repetitive and basic processes like mass mail send-outs and other deployments. This makes Python use cases extensive as far as IoT and connected technologies are concerned.

Python is great for writing APIs and interacting with the database. Python was used for back-end integrations and development of such famous sites as Instagram, Quora and DropBox. Two major Python back-end development tools are Django and Flask.

That's another niche where Python is picking up steam fast. As a flexible and open source language, Python has very powerful libraries for data analysis, manipulation and visualization (e.g., Seaborn, Matplotlib). Its syntax is simple and can look familiar to programmers skilled in Matlab, Java, Visual Basic or C / C++.

Python libraries such as pandas, NumPy, scikit-learn and others bring features from R and Matlab to Python development. Some of these features are data frames, modeling and matrix operations. Additionally, Python features a plethora of libraries to build and implement machine learning algorithms (e.g. PyBrain, OpenCV, SimpleCV, Pylearn2, scikit-learn, etc). For work with human language data, Python offers NLTK platform.

Python is extensible in C/C++ in which you can run large-scale data mining faster.

Python is a go-to language for Raspberry PI and other microprocessors. With Python and Raspberry PI you can built IoT and connected tech solutions and products like robots, home automation, smart agriculture and more. 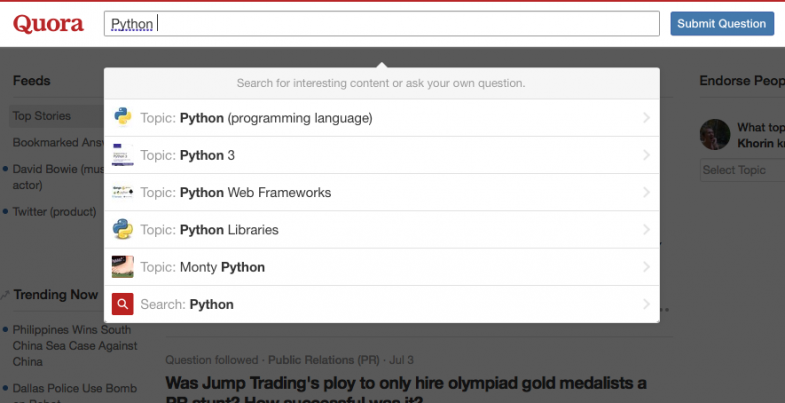 According to Quora Founder Adam D'Angelo, his team didn't want to use PHP from the very beginning to avoid getting stuck on it for legacy reasons (exactly what happened to Facebook) and to avoid using Microsoft stack. Having briefly considered C#, Scala and Java, they opted for Python because "it was fast enough for most of what we need to do." They also had confidence in Python's ecosystem development potential and thought it'd be good for the life of their codebase.

"The main reason we chose Pylons over other Python web frameworks was because we knew we wanted to replace a lot of it with our own stuff (we don't use templates or an ORM) and Pylons seemed like a better choice for doing that than other frameworks we considered (Django, etc.)  This was based on just reading stuff on the web since none of us had used Pylons before," said Charlie Cheever, Co-Founder of Quora.

Other reasons why Python was chosen include, but aren't limited to:

Both Quora and Python are doing some really amazing real-time calculations with Python to keep things relative!

To wrap it up, Python is a to-go language for many things from animation to enterprise level web applications. It's neat, simple and procedural like PHP and can easily be used as a functional language like Lisp.

Let's discuss how Intersog can help!