Swift has been around for about seven months now and its upward mobility doesn’t show any signs of slowing down. We found it cool and fast while lacking Swift best practices and although not much has changed, Swift is here to stay.

Developers around the world have quickly adopted Swift because it is a language that is essentially easy when compared to Objective C. Further, there are also elements of it that are borrowed from other languages such as CLU, C#, Haskell, Python, Ruby, and Rust.

Not everyone can develop a new language, but Apple is one of the few companies that have the ability to do so. They also have the infrastructure to ensure promotion and successful adoption. With established platforms like iOS and OS X, it’s easy to encourage incorporation within existing projects with Objective C code.

Objective C is Still Important (but for how long?)

When Swift was first released, there was a bit of apprehension and the general feeling was to wait and see what happened. Not much has changed since then as Objective C is still needed (but maybe not for too much longer).

As educational institutions like Stanford University release free courses on iTunes University to teach Swift app development, there may be a general increase in the number of programmers switching to Swift. If you look at Tiobe Index for April 2015, Swift is ranked 24 and this doesn’t come as a surprise. It has been incorporated into apps by popular brands like LinkedIn and American Airlines, and soon it will be almost everyone. Read more about software development company in Chicago.

As a result, it is safe to say that although it’s important to know an old coding language Objective C, it’s not going to be around for much longer. Swift has quickly become a key player in app development and the future looks bright. Xcode 6.3 was released during the first week of April, we also saw Swift 1.2 come out of beta testing and this pattern is expected to continue.

Swift is one of the most used programming languages around the world (and it hasn’t even been out for a year). If you look at Stack Overflow Developer Survey results, one would have to assume that everyone is jumping on the bandwagon. 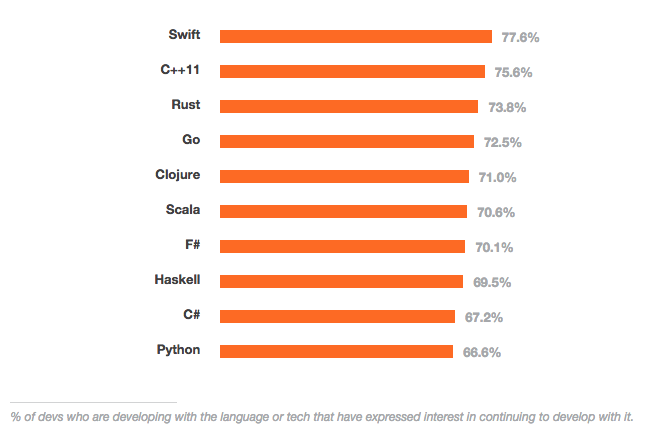 Waiting for a Cross-Platform Solution (but will it happen?)

The general feeling among developers is that Xcode is the best IDE for developing for iOS and it’s the same for Objective C vs. Swift. However this will change if a better IDE for iOS comes out that is also compatible with an Android platform. It’s a no brainer as this would make developing an app on both iOS and Android a lot easier.

Although there are signs that Swift will dominate coding over the next few years, it’s hard to see what the tipping point will be. In April this year, Microsoft introduced new tools for porting iOS apps to Windows 10, but there was no sign that Swift would be incorporated. So the waiting game continues and as a result it keeps Objective C relevant.

In a micro sense, Swift has made developing easy. Coders are adopting Swift in large numbers because it’s user friendly. This is essentially the biggest impact it has had on iOS app development.

As Swift makes app building hassle free, we will have to wait and see what new opportunities open up in the future.

How has Swift changed the way you approach iOS app development?