Ten Trends In Mobile User Behavior: US versus Western Europe

Home » IT News and Trends » Ten Trends In Mobile User Behavior: US versus Western Europe

Mobile devices have already reached a critical mass around the Globe serving us as permanent companions regardless of our geography or demographics. But how we engage with mobile devices and mobile content varies significantly depending on who and where we are.

Google's Our Mobile Planet Research that aims to provide businesses with insights into mobile consumer trends and facilitate data-driven decision making allows benchmarking certain differences in how US and Western European consumers actually use their mobile devices. To have a snapshot of today's mobile consumer trends, we have compared the United States to some of the EU most competitive economies such as Sweden, Germany and the United Kingdom. As a result, the following trends have been identified:

1. Smartphones have the deepest penetration into the UK and Swedish markets

Both in the UK and Sweden, 51% of people own smartphones versus 44% of the US and 29% of German consumers. 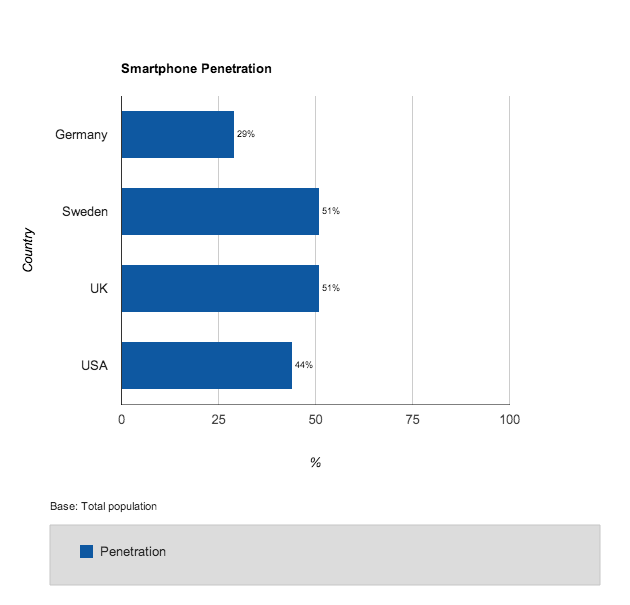 2. iOS is leading the way in Europe, while Android – in the United States

According to the Google research, iOS is an operating system of choice for 48% of Swedish, and 35% of German users. In the United States, vast majority of users – 40% - prefer Android devices. In the United Kingdom, iOS users outnumber Android users by only 1%. 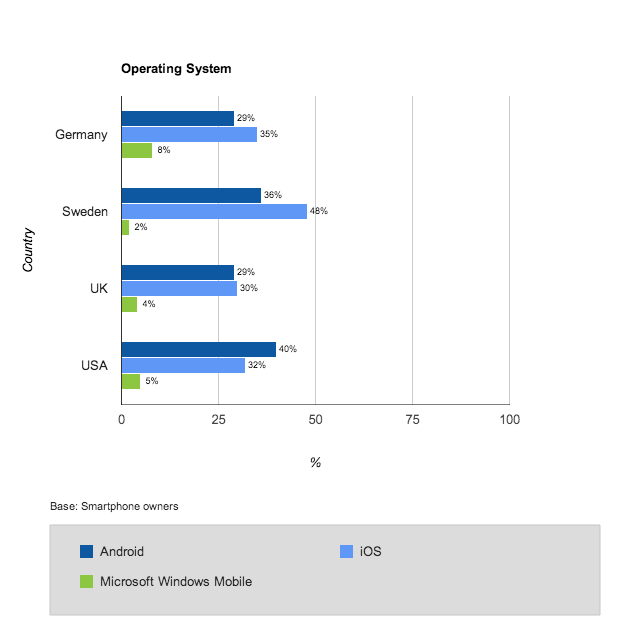 3. Vast majority of people use their mobile devices for accessing apps and web browsing

In the United States, almost 75% of mobile consumers admit using their devices for accessing apps and almost 70% browse the Internet on them. In the UK, Sweden and Germany more than 75% (cumulative) use their smartphones for web browsing. 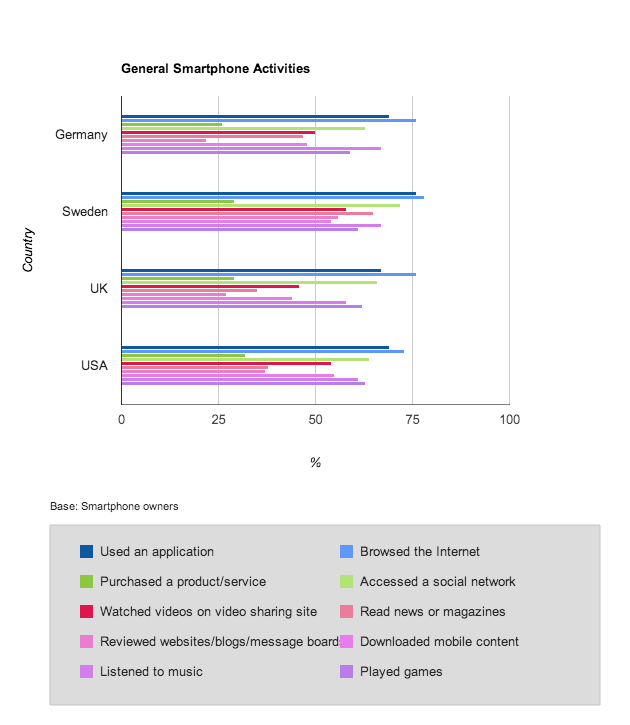 4.German mobile users purchase more apps than their counterparts in the UK, Sweden and USA 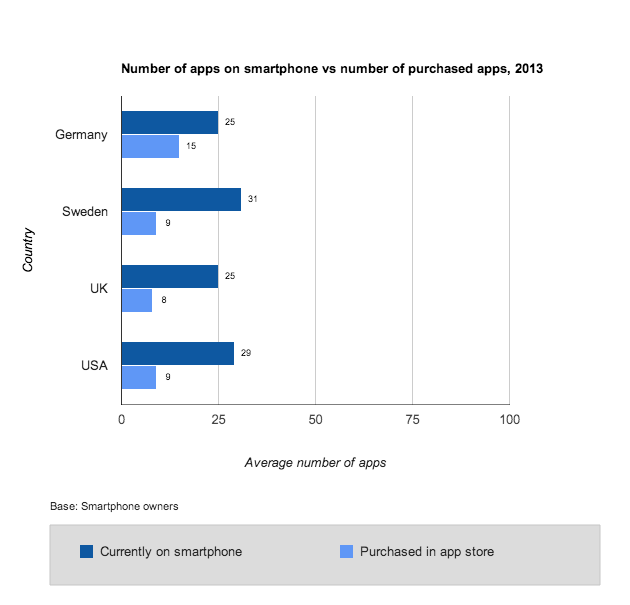 5.Swedish consumers plan to use more apps in the future

According to the Google research, in the future prevailing majority of Swedish users will download more apps for their devices, while in other countries people will stick to their current number of apps in use. 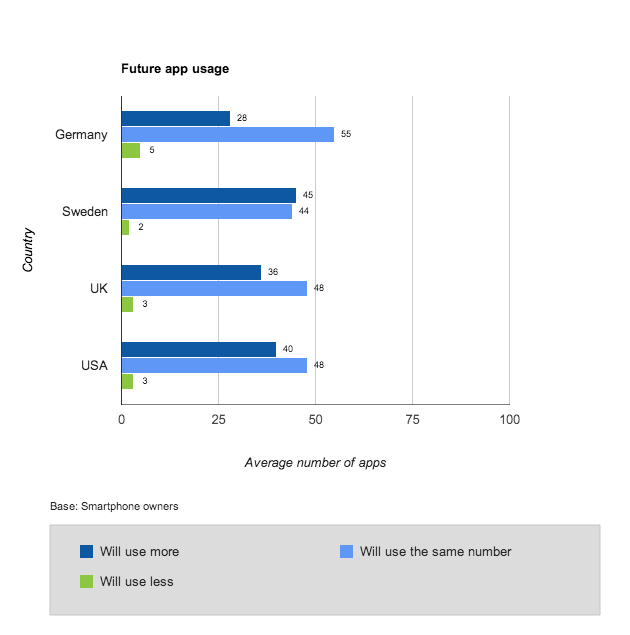 6.Swedish consumers access their social networks on smartphones more often than their counterparts in the UK, Germany and USA

As the research shows, 62% of Swedes access their social media channels via their smartphones daily versus only 45% of German users. 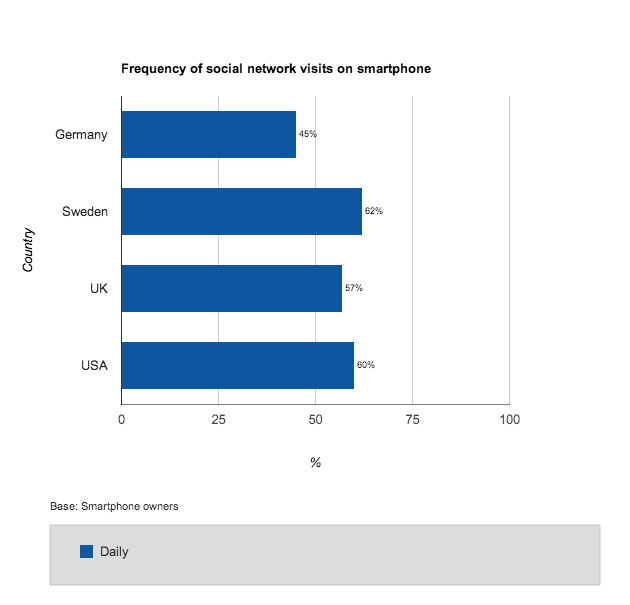 Although Swedish consumers access their social networks very often on their mobile devices , they share very little content compared to other countries polled: 16% versus 34% in the United States, 23% in the UK and 20% in Germany. 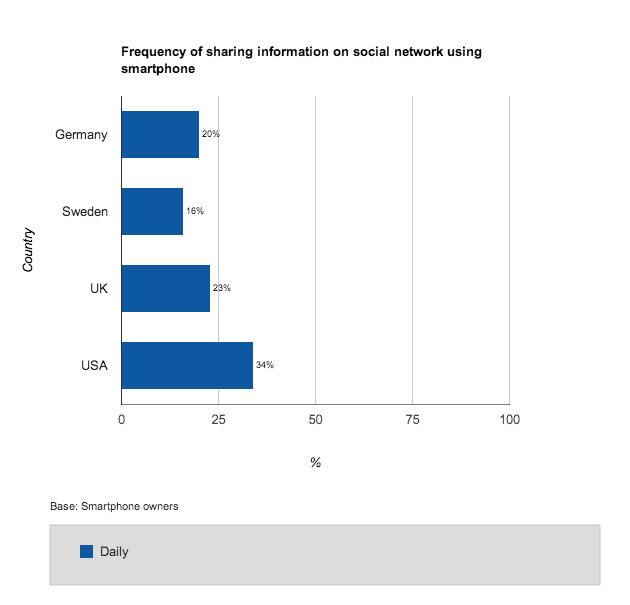 8.US consumers notice mobile ads while in an app, Europeans – while browsing a website 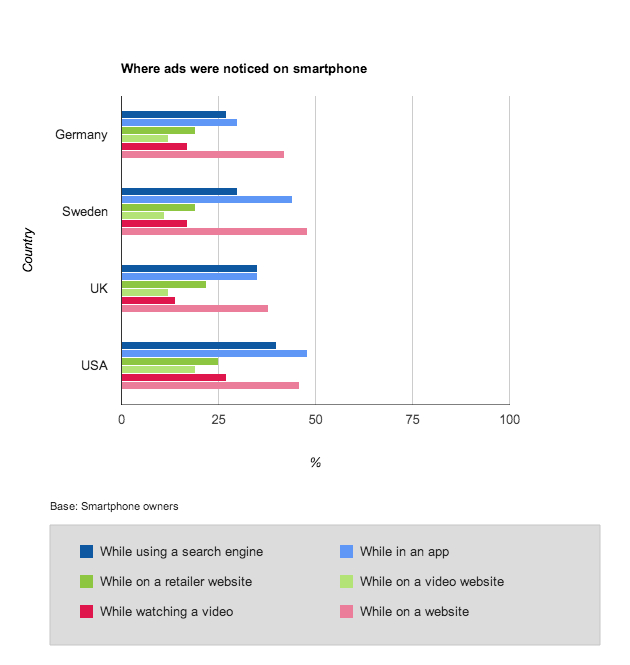 9.Local search is more popular in the United States than in Europe

A significant difference has been detected in how US and European consumers use their devices daily for the local search (e.g., restaurants, clubs, businesses, shopping malls, etc.). European consumers yet lag far behind their US counterparts as far as local search is concerned: 27% in the United States versus 15% in Germany, 12% in the UK and 11% in Sweden. 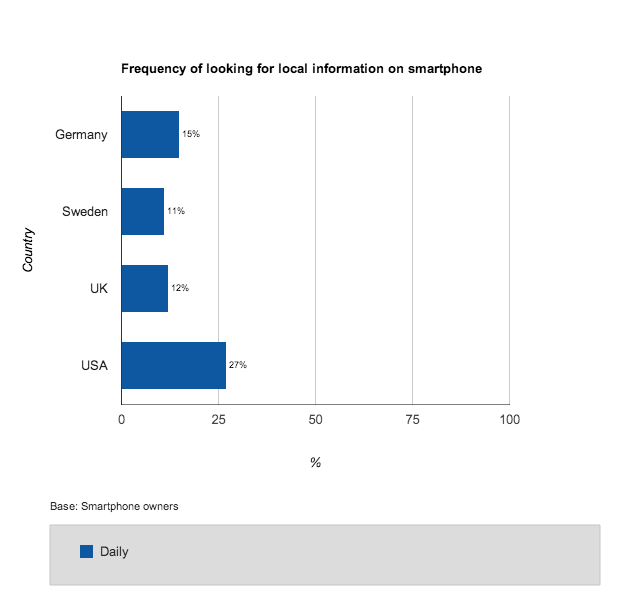 10.European smartphone users purchase more often after a local mobile search than their US counterparts

As the research by Google suggests, more than 50% of all mobile users in the United States call a business or service after finding its information on the Web. On the other hand, European mobile users seem to be more ready to buy something online after doing a local search than their US counterparts. 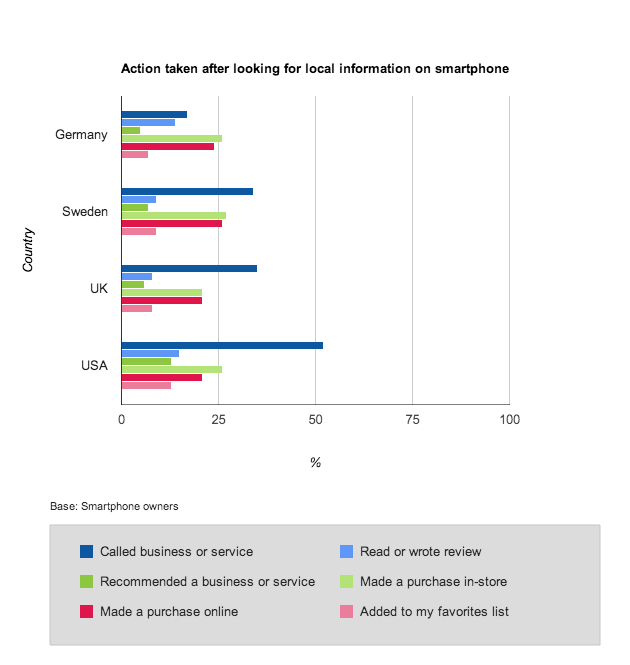 Today's mobile space is very hectic and requires businesses to find unique mobile differentiators and create multiyear strategic visions to pull ahead of competitors and make the most of mobile opportunities that lie in from of them. Whether companies will be able to embrace a significant change in corporate culture and align competences across IT and business in the near future depends on how much they are ready to invest in mobile innovation now. Therefore, a longer-term mobile disruption and a shift from tactical efforts to transformative mobile strategies are anticipated globally in 2013 and it is very interesting to see who is going to win the mobile race at the end of the day – the United States or Europe?

Source: Our Mobile Planet by Google, 2013

Intersog
IT and talent solutions
Intersog is a leading IT solutions provider in the United States and beyond. The company has provided agile software engineering and staffing services for Fortune 500 corporations, tech startups, and SaaS businesses for over fifteen years. Why Intersog.