How the Blockchain Will Impact UX and UI Design

The primary objective of almost every innovation is to make the end-users’ lives a little bit easier. When you look at it in a technological context, the innovations themselves can transform into successful businesses.

The blockchain is already disrupting and transforming industries across the board with enhanced transparency, improved data quality, and decreased infrastructure costs. But if you look at it beyond the hype, it’s thoughtful functionality and creative user interfaces (UI) that ultimately lead to success.

At this juncture, it’s important to note that the blockchain is far from user-friendly. For example, it’s still relatively difficult for a lot of people to purchase cryptocurrencies for the first time (however, things are slowly getting better as more and more enterprises adopt a mobile-first approach).

So when incorporating the blockchain into your next product, the key for UX/UI designers will be to figure out how they can leverage the key benefits of this technology while providing a simple and intuitive experience.

To achieve this, the first step will be to stop perceiving the blockchain as just a backend infrastructure. It’s important as regardless of the problems and complexities that are associated with it, this technology is going to have a huge impact on the following:

While you’re reading this post, new applications are being built with this decentralized ledger at its core to disrupt entire industries. But if you look at the above, the value of the product and the market it serves isn’t going to be something new.

This means that whether your product is implemented on the blockchain or not, it shouldn’t impact how you approach UX/UI. However, although the designers are all designing for the same audience, the underlying blockchain technology can’t be ignored.

When it comes to UX/UI design principles, there are some key principles and design rules that are critical to the whole process:

So how does this all play out when you add the blockchain into the mix? Let’s take a look.

Control Over Irreversible Actions and Errors

For the most part, users tend to choose functions without really thinking about the consequences. It’s important for designers to keep this in mind as the blockchain’s highly irreversible.

For example, once something has been recorded on the decentralized ledger, it can never be altered or deleted. So how would you design an application that has this technology at its core?

To provide a sense of control to the end user, decentralized applications should be designed to include multiple processes that can help enhance user awareness.

For example, you can add confirmation steps like an overlay window summarizing the information that’s about to be presented for a new block submission. This process should also be supported by functions that can enable seamless revision and editing.

UI designers also need to add warnings, call-to-action buttons, and confirmation dialog boxes with accurate information to provide the end-user with the final choice on how they would like to proceed.

This approach can help the user-base feel some sense of control over irreversible actions. It can also help them feel safe and more confident while using the application.

Decentralized apps should be designed to maintain the same visual language throughout the whole platform. It should also be designed in a way that’s highly perceptible and manageable so people don’t waste time trying to figure out its functionality.

The locations of things like icons, call-to-actions, and scroll bars should be consistent throughout the platform. These visual definitions should also behave in a way the end-users have grown accustomed to with other applications.

It’s important because whenever a user is expected to unlearn old habits, it can quickly turn into a source of significant frustration.

Whether it’s for the blockchain or any other technology, a minimalist approach to visual aesthetics can help easily communicate the functionalities of the application. This means that you can enhance efficiency and satisfaction just by making it easy to quickly correlate, categorize, and interpret the content (and functions). 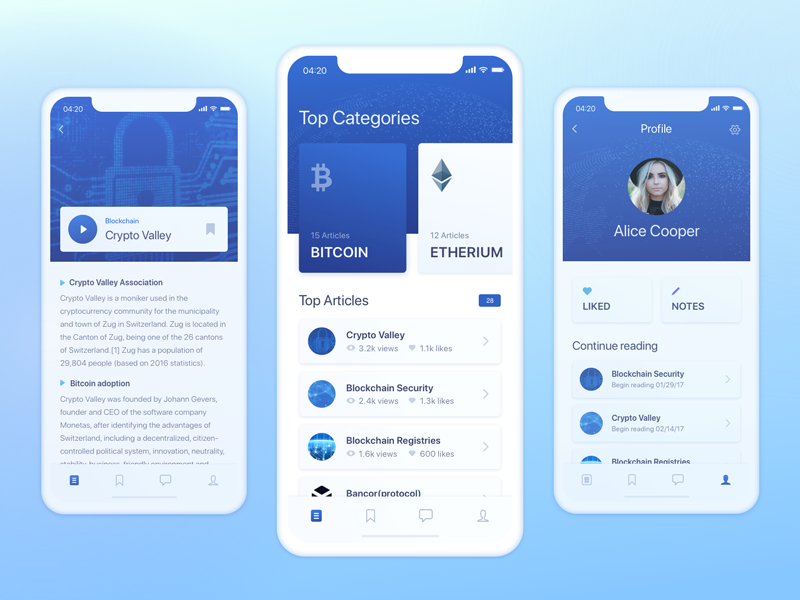 A mobile app design created for a knowledge sharing platform by the Zajno Crew(CA, USA)

As some of these unique system-oriented terms and functionalities might be hard for some people to understand, it’s also important to try and make it as simple as possible by relating it to a real-world situation.

This means that designers need to use the same type of language and iconography that the audience is used to while relating specific blockchain functionalities to real-life experiences.

Let’s face it, although there’s a lot of hype surrounding the blockchain, it’s still relatively new and a lot of people haven’t heard about it. Because of its (somewhat) complex nature, designers should expect users to deal with a significant learning curve and take appropriate steps to accommodate them.

More often than not, learnability and usability go together, so to facilitate seamless learning experiences, UX/UI designers can highlight the functions and features that they should use frequently to get comfortable with the product.

However, it’s important that these frequent actions don’t stand in the way of enhanced performance and productivity. Like with any other application, it will also help to have FAQs and tips that are easily accessible.

This technology’s inherent problem with high latency and lack of clear feedback is a huge challenge that has to be addressed. For example, at present, Bitcoin can only handle a maximum of seven transactions per second (or more realistically two or three) compared to VISA’s 2,000 or PayPal’s 115 transactions per second.

As there are a lot of functions and processes that are unique to the blockchain, the end-user might not be aware of what’s going on while it’s executing a task. So you have to find a way to provide a status and progress update within the UI.

For example, if you’re purchasing Bitcoin for the first time and it's taking hours to complete the transaction, it’s important to inform the end-user as quickly as possible. It’s essential because the time it takes to complete the task has the potential to cause a significant amount of distress to the end-user.

System feedback should always be clear, concise, and jargon-free and should be supported by relevant visual cues. This will also help the end-user quickly understand what’s happening during their first few interactions with a blockchain-based application.

A highly transparent and decentralized technology like the blockchain is all about building trust, but trust without an enhanced UX and UI (that’s easy to navigate) defeats the whole purpose of the project. As a result, it’s important to understand how the blockchain works before engaging in UX/UI design.

Do you want to build a decentralized app for your next project? We can help! Reach out to Intersog now!