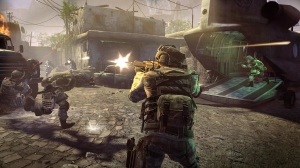 No secret that Ukrainian software developers are recognized globally as highly competent, quality-oriented, creative and persistent IT resources that any big technology player wants to have on staff or as an auxiliary workforce. Google, Facebook. Microsoft and Skype organize regularly their headhunting tours to Ukraine to recruit local software engineers and testers for their head offices. Samsung, Playtech and Travian Games set up their own software development teams in Ukraine to add value to their domestic operations. Freelance sites such as Elance or oDesk say Ukrainians are the world's 3rd most wanted IT nation after Americans and Indians. However, only few people really know that Ukrainians have contributed significantly in the development of some legendary and award-winning PC, video and mobile games  - those that make today's Hall of Fame of the gaming industry.

I've just come across this list of games developed in Ukraine and here's my English language adaptation of it.

1. World of Tanks / World of Warplanes

World of Tanks is a famous free-to-play MMO game featuring the 5 primary types of battles that was developed by Belarusian game studio Wargaming and earned $372 million in 2013, according to Super Data. Back in 2010, Wargaming began cooperating with a Kyiv-based studio Persha Studia on design of the French vehicles for the World of Tanks' gameplay. Also, Ukrainian Persha Studia fully developed Wargaming's next big hit game - War of Warplanes that was released publicly in November 2012. Both games are monetized successfully via in-app purchasing (premium accounts, premium tanks and ammunition).

Any tough gamer is familiar with this historical fiction action-adventure video game and its protagonist Desmond Miles who inspired fashion designers to create an 11-piece clothing line that is currently available for purchase on eBay and other eCommerce sites. The game has appeared on most of the consoles and OS including PlayStation 3, Xbox 360, Nintendo, MS Windows, Mac OS X, iOS, Android, and the Wii U.

Sony Online Entertainment outsourced some elements of development of their blockbusting Star Wars series to the Ukrainian game studio Boston Animation long time ago (before 2008 actually). In particular, Ukrainian developers and game designers were involved in building Star Wars: Galaxies — Episode III Rage of the Wookiees, and Star Wars Galaxies: Jump to Lightspeed. Although Boston Animation closed down in 2008, its former developers and designers continue working for Crytek and other leading games studios that outsource their games development to Ukraine.

German games developer Crytek has its own development center in Kyiv that has been developing a legendary first-person shooter Warface since 2011. Warface is based on CryEngine 3 and is co-produced by Crytek Seoul and Crytek Frankfurt.

One of Ukraine's most popular shooters Metro 2033 was developed by 4A Games founded by developers of S.T.A.L.K.E.R.: Shadow of Chernobyl. However, since all game copyrights were sold to Koch Media for $5.8M, this game can now be considered a foreign one and deserves to be included in this review.

In addition, Gameloft set up own development center in Kharkiv, Ukraine's 2nd largest city and IT hub (after Kyiv), in 2007 and has developed the following video and mobile games since then: Asphalt 6, Oregon Trail, Six Guns, NFL 2012, Fishing Kings, Rainbow Six: Shadow Vanguard, The Settlers, Driver.

Two other leading games developers - Travian Games and Playtech - also run their own development teams in Ukraine, so a list of world famous games built in Ukraine is obviously much longer. What other games would you add to it?