Chatbots: A New Gimmick Or Technology That Will Change Web and Mobile Forever?

Chatbots are the next step in web maturity and the future of IT. At least that's what some of the world's largest tech companies agree on. "This technology is inevitable," said Microsoft's CEO Satya Nadella. Facebook's Messenger Bot Store is considered to be the key milestone after the launch of the Apple's App Store in 2008.

Let's see why there's so much buzz around chatbots in tech media nowadays and whether or not chatbots will have a good chance to replace apps in the near future.

What is a chatbot?

Chatbot is a type of a programmable messenger that enables real-time communication with users and aims to help them solve their immediate needs or have fun. Let's say you need to check a weather forecast in a certain place. In most cases you'll use a mobile app already installed in your smartphone. Yet, instead of using an app, you can just ask a bot and get a direct response right away. As such, a chatbot can become the only multi-functional assistant that helps users shop, find required information, better plan trips, etc. Social networks like Facebook and media publishers are so excited about chatbots because they'll allow attracting more brands to host their brand chatbots on their platforms. By providing open APIs, hosting and value-added services, tech brands will be able to find new monetization sources and significantly increase their user base and user loyalty.

It's interesting to note that today's chatbots aren't 100% automated and are still partially managed by people. However, as machine and deep learning is evolving at a rapid pace, chatbots will become more easily programmable and intelligent.

Is chatbot technology really that innovative?

Not at all! The very first attempts to create such programs date back to the 1960s. In the recent years, there have emerged experimental chatbots serving primarily as user entertainers. The technology has remained imperfect for years, therefore no serious tech company has ever thought of expanding their service portfolio with use of chatbots.

Streamlined development of the artificial intelligence (AI) technology allowed for commercial implementation of the chatbot technology. That's why there's so much hubbub about them today!

The chatbot technology definitely has a huge potential! Stay Nadella believes chatbots will ultimately change the way we interact with technology. Live communication is becoming a new platform. Now we, humans, adjust ourselves to technology by creating certain queries understandable for bots and completing tasks. Chatbot technology lets us get rid of it by allowing us to ask direct questions to a computer and receive natural answers as if provided by a human being. To cut it short, chatbots will allow us to interact with technology much more efficiently without making queries such as "watch a movie online" or "how much does it cost to build an app?".

Are all chatbots the same?

Not at all. There're both silly and smart bots. And only today we've reached the point when bots are becoming more intelligent by learning how to consider a particular context, analyze user behavior and plans, etc.

For instance, if you ask a silly bot about what the weather will be like in Chicago tomorrow, you'll get a direct and precise answer. A smart bot, however, will look into your calendar and organizer to find out what your plans for tomorrow are and make the best recommendations as to how you should dress up or where to wait for the rain to be over. It'll make sure you feel comfortable in any weather!

DYK: 95% of all chatbots available today are silly bots!

How perfect are smart bots?

Even the smartest bots available today are far from being perfect. A recent case with Microsoft's Tay bot for Twitter demonstrates the major flaws of the technology. Tay caused controversy by releasing inflammatory tweets and it was taken offline around 16 hours after its launch. Microsoft's engineers deactivated the bot and fixed its self-learning capability. But even this didn't help: the bot disappointed thousands of users by invoking a flood of spam messages.

The most advanced chatbot systems of today

The so-called versatile, or interface bots (aka voice assistants) are most interesting for developers and brands. Cortana is Microsoft's prospective technology of the future. "Hey, Cortana" is a phrase that's pretty commonly used by hundreds of thousands of Microsoft users worldwide. Satya Nadella can't imagine his everyday life without this virtual voice assistant.

Apple stakes on Siri. Although Siri is a pure voice communicator, it can be distinguished as a chatbot indeed, because its functionality is based on a dialogue with the user. Of course, Siri is far from being perfect, too. It doesn't remember a lot of things, nor does it always understand the speaker perfectly well. Yet, we can anticipate Siri to become much smarter as AI and machine learning mature.

Meanwhile, Facebook is fixing its virtual assistant M, manually. On the one hand, such approach lets users get much more human-like answers to their questions, while on the other hand, it allows for bot's self-learning based on live interaction with users. 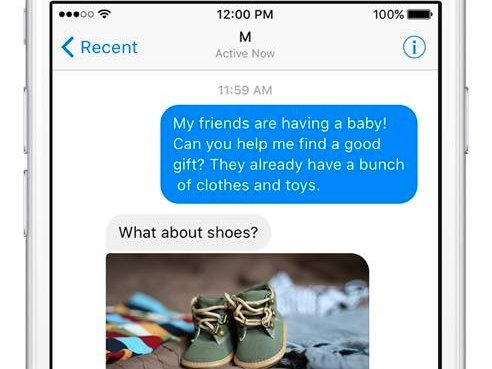 Amazon has its own chatbot called Alexa. It's able to recognize user speach, answer user questions, while existing out of the smartphone! Alexa is pre-installed in all Amazon Echo products only.

The future of chatbots

Once Facebook Bot Store becomes a reality, it'll obviously open up some new cool opportunities for startups, established brands and application developers. Each will have own piece of the chatbots market pie: brands will build own chatbots to better interact with their users and expand outreach to potential target audience; startups and software developers will provide chatbot as a service (CaaS), create chatbot constructors and development platforms as well as deliver services to maintain and support existing bots.

Developer Experience Lead at Uber, Chris Messina claims that 2016 will be the year of conversational commerce. He's confident chatbots will become the main tools of interaction between businesses and users as soon as in 2017. And it's expectable that Facebook Messenger Bot Store won't be the only of its kind. Rumors say that Ted Livingston, the creator of the Kik messenger, is going to present a highly competitive chatbot platform soon. Also, there're rumors going around the Silicon Valley that Google is going to present a break-through AI-based technology to compete with Facebook and other companies for chatbots market share. Google Now, Google's virtual voice assistant, is neither a full-fleged assistant, nor a chatbot in its essence. As such, experts believe Google will present a totally new product to enable live communication between users and a search engine.

As mentioned above, Siri will most likely become smarter soon. However, it'll have a way more competitors than it does now. As it's become known, Adam Cheyer, one of the Siri developers, has launched his own startup called Viv Labs that's working on building a new chatbot Viv. Viv is promised to have capabilities no existing chatbot has or has ever had before!

Let's say you're going to drop by your brother's place and want to buy a bottle of wine on your commute. The task seems to be very easy, doesn't it? But today, you have to explain it to your computer or smartphone in a step-by-step manner to be understood: 1) you need to search for wine that would best suit your main course; 2) you need to find good wine stores located along your way to the brother's place, 3) you need to choose one store to buy your wine; 4) you need to count your commute duration to make sure you won't be late if you stop by a wine store.

According to Cheyer, Viv will be able to do all of the above by just hearing an initial simple query. The chatbot will help you choose the best store and wine to best match your dinner and will also prompt as to when you should leave home to get to your brother's place on time.

To cut a long story short, we're about to witness some really cool transformations in the IT world going forward. So, it's not surprising that almost all of today's leading brands and tech companies are turning their eyes in this direction, as no one wants to miss out on innovation and benefits it provides.

And what's your take on this? Do you believe chatbot is just a new buzzword or a prospective technology of the future? Please share your opinion in Comments below or send us a tweet to @Intersog!