In Q1 2013, North American and EMEA gaming markets showed moderate growth rates of 2% and 4% respectively and both lagged behind Latin America and Asia Pacific with their 11% growth each.

Global game revenues are expected to reach $70.4 billion and show a 6% year-on-year (YoY) increase, while the number of gamers is likely to surpass 1.2 billion by the end of 2013, according to Newzoo's 2013 Global Games Market Report. General market trends presented in the Report are:

Further, we've compared the 3 countries surveyed previously by Newzoo – UK, Germany and the United States – to see how their gaming markets differ and what game developers should focus on while creating games for each of these markets.

Pic. 1: Number of active gamers in the UK, Germany and USA 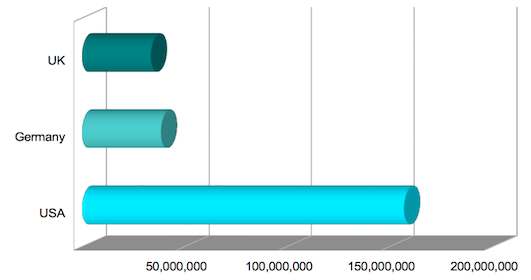 As estimated by Newzoo, the UK population of active gamers is 33.6 million, in Germany there're 38.5 million gamers and in the United States there're 157 million gamers as of beginning of 2013. 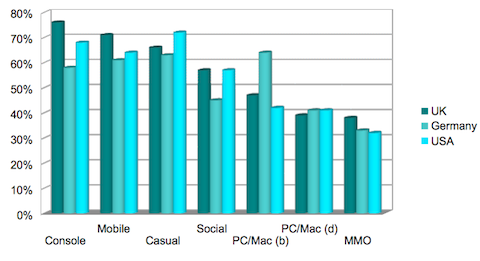 In the UK, the top 3 platforms are console, mobile and casual that together account for 70% of all gamers. Console games are still the most played ones, as reported by 76% of the UK gamers.

In Germany, the top 3 platforms are PC/Mac (boxed), casual and mobile accounting for 63% of all gamers. PC/Mac is keeping 64% of the user share.

In the United States, most gamers - cumulative 68% - are spread across casual, console and mobile platforms, with 72% users preferring casual games.

Social gaming remains the most underspent platform in all three countries surveyed.

Read about our mobile app development.

Newzoo Report shows the UK has been a quicker adopter of cross-screen gaming than all other EU member states and the United States. 26% of UK, 17% of German and 22% of US gamers play on all 4 screens, as seen from the Report. Computer screens remain the most played ones, while personal screens are only gaining traction among gamers.

Future gaming market growth in all 3 countries surveyed is expected to come from smartphone and tablet games in combination with the free-to-play business model.